I've spent the past few days working on 2D related stuff and minor fixes. Quite a few hours have been invested "only" logging and debugging some demos still not working properly, because, for example, some basic stuff seems to be still failing. Also, I've worked a bit onto getting more speed from 3D, which got a bit faster, but still needs quite a lot of work.

Today I'll talk a bit about the last one I've been working on, even if the actual implementation is more a raft from what it should be. I'm talking about the pixel blending, which can be used, for example, to cross fade from one image to another (as used in Zelda Gallery), or blending multiple images (for example, I think that's what it's used for "MP: First Hunt" menus). You can get a proper reference here. I've still to make some proper improvements, because I still don't support some effects that can be achieved with multiple source selections, for example, but I'll fix them in a few days.

Today I prefered to leave the technical details aside, as I don't really still feel confident about how the special color effects work. Anyway, here's the blend support as seen in Zelda Gallery (source, half blended, and destiny): 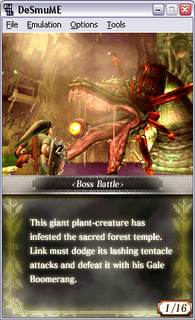 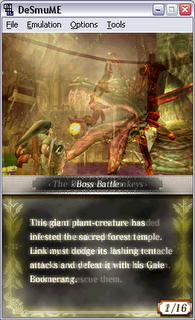 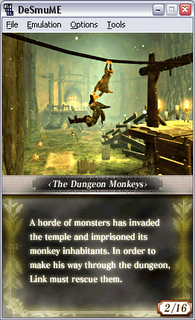 Today I've been working on the capture unit, which, from the examples (and games) I've been able to get my hands on is used mainly for using 3D output on both screens of the DS, motion blur or screenshots. Of course there're a lot of other uses (much more that I can think at the moment), but for example, it's used on the menus of "Metroid Prime: First Hunt" for all the moving stuff on both screens. My implementation right now is very vague (just did today in a few hours) and lacks support for all the modes, but at least got the menus showing better in Metroid.

Also did some misc bugfixing here and there, that's not even interesting to talk about. Only one of the minor tweaks in the texture handling routines, that I thought would give crappy results, fixed hell a load of stuff.

So, as the proverb says, a picture is worth a thousand words: 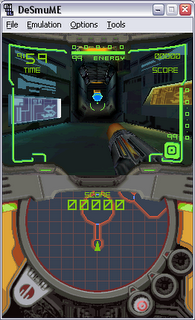 I fixed quite a large amount of bugs, but the 2 most important ones, would be the ones from topic: texture coordinate generation and flickering.

The first one is quite simple, as most PC hardware, the DS supports texture coordinate generation. This is used, for example, if you want to have a pool with water, the water being a texture mapped plane, and want it to seem to wave: instead of having a large amount of geometry, just generate the texture coordinates varying to get the visual effect of waving. I had made an implemention long ago, but I always found samples which rendered wrong, and then when I fixed one of them, another was broken. The bug was rather stupid: as openGL and DS texcoord generation doesn't map 1:1, I just pre-transformed them, and then sent them to openGL. The problem, was that I was not resetting the texture matrix, and as a such, at last they got pre-transformed by me, and then transformed by openGL. Stupid bug of the year, for sure.

Flickering was a damn annoying bug, which I never got enough motivation to fix, it "just" involved retrieving the openGL framebuffer, then copying it to BG0, and send it to the layering pipeline that desmume uses. Sounds simple, in fact it's simple to implement, but the code is ugly, probably slower than it should be, and, by the fact it has to be transformed from 24bit to 16bit, it looks a bit uglier (as in the DS, :P)

And more, or less, that's all for today, let's just put the usual screenshot: 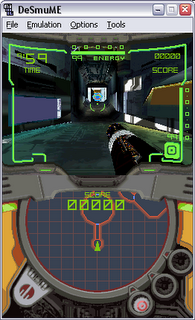 For further references on texcoords, here you can find a nice explanation.

I'm really busy with stuff not related to emulation right now, so not much progress has been done. I've only done some work towards making 3D processing faster, but least than a 5% improvement was achieved :P

I've really been thinking about when I should release, and I narrowed it down to one option: I'll release when either Super Mario DS or Metroid Prime look right, that means fixing compressed textures or fixing the generated texture coordinates. I'll probably make other speed fixes, but compatibility comes first.

No interesting stuff today neither shots, but it's late and I'm too tired :P
Posted by shash at 3:10 AM 3 comments: